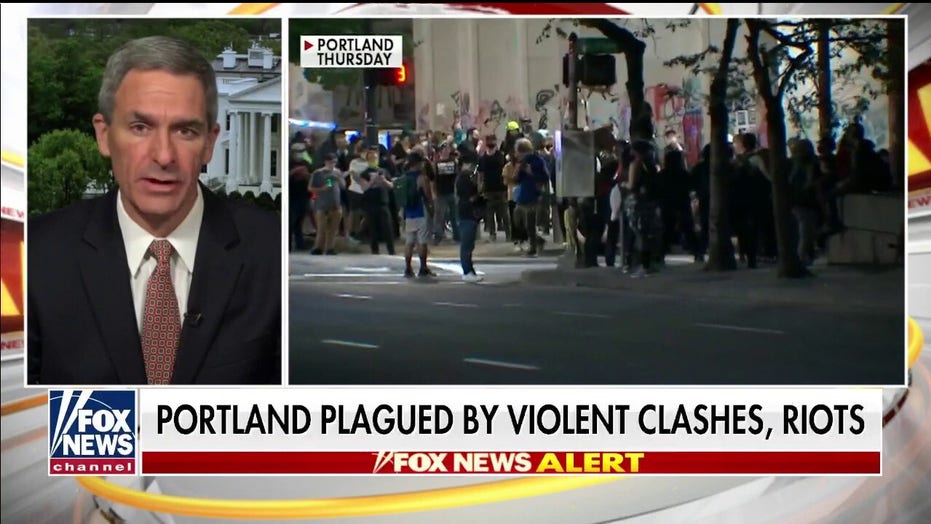 Portland Mayor Ted Wheeler is demanding that President Trump remove federal agents deployed to the city amid criticisms of a heavy-handed response against protesters and journalists and reports that militarized law enforcement personnel have refused to identify themselves.

“Keep your troops in your own buildings, or have them leave our city,” Wheeler said at a news conference Friday. "This is part of the core media strategy out of Trump’s White House: to use federal troops to bolster his sagging polling data. And it is an absolute abuse of federal law enforcement officials.”

His remarks came on the same day the American Civil Liberties Union of Oregon filed a lawsuit against the Department of Homeland Security (DHS) and the U.S. Marshals Service for allegedly violating the rights of journalists and legal observers. The suit adds the federal agencies to an existing complaint to halt crowd control measures and the use of tear gas, rubber bullets against the media and legal observers during protests.

Portland Police Chief Chuck Lovell said that officers are in contact with federal agents, but that neither controls what the other does.

In this photo provided by Doug Brown, agents from different components of the Department of Homeland Security are deployed to protect a federal courthouse in Portland, Ore., Sunday, July 5, 2020. Protesters who have clashed with authorities in Portland are facing off not just against city police but a contingent of federal agents who reflect a new priority for the Department of Homeland Security: preventing what President Donald Trump calls "violent mayhem." The agents clad in military-style uniforms include members of an elite Border Patrol tactical unit, and their deployment to protect federal buildings and monuments is a departure for an agency created to focus on threats from abroad. (Doug Brown via AP)

Federal officers have detained 13 people for crimes related to the ongoing protests, Oregon Public Broadcasting reported Thursday. One video showed two people in helmets and green camouflage with “police” patches grabbing a person on the sidewalk, handcuffing them and taking them into an unmarked vehicle. 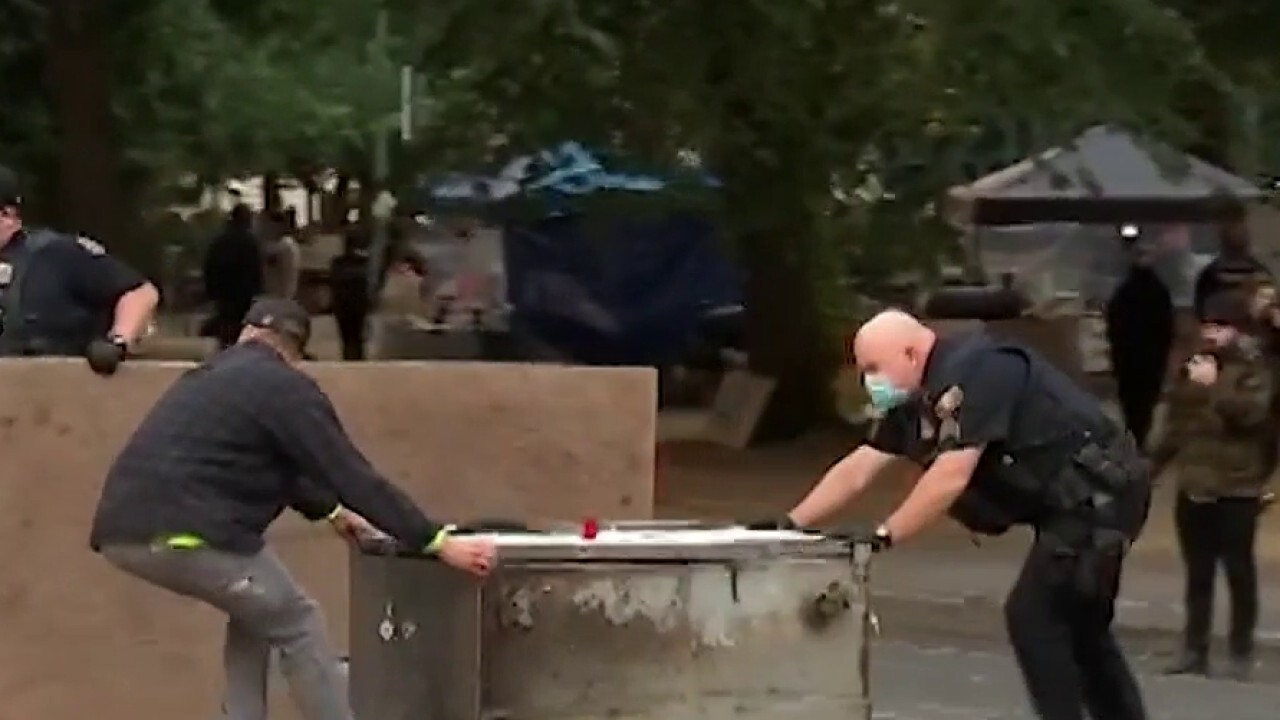 “Who are you?” someone asks the pair, who do not respond. At least some of the federal officers belong to the Department of Homeland Security.

The U.S. Customs and Border Protection said in a statement that its agents had information indicating the person in the video was suspected of assaulting federal agents or destroying federal property.

“Once CBP agents approached the suspect, a large and violent mob moved towards their location. For everyone’s safety, CBP agents quickly moved the suspect to a safer location,” the agency said. However, the video shows no mob. 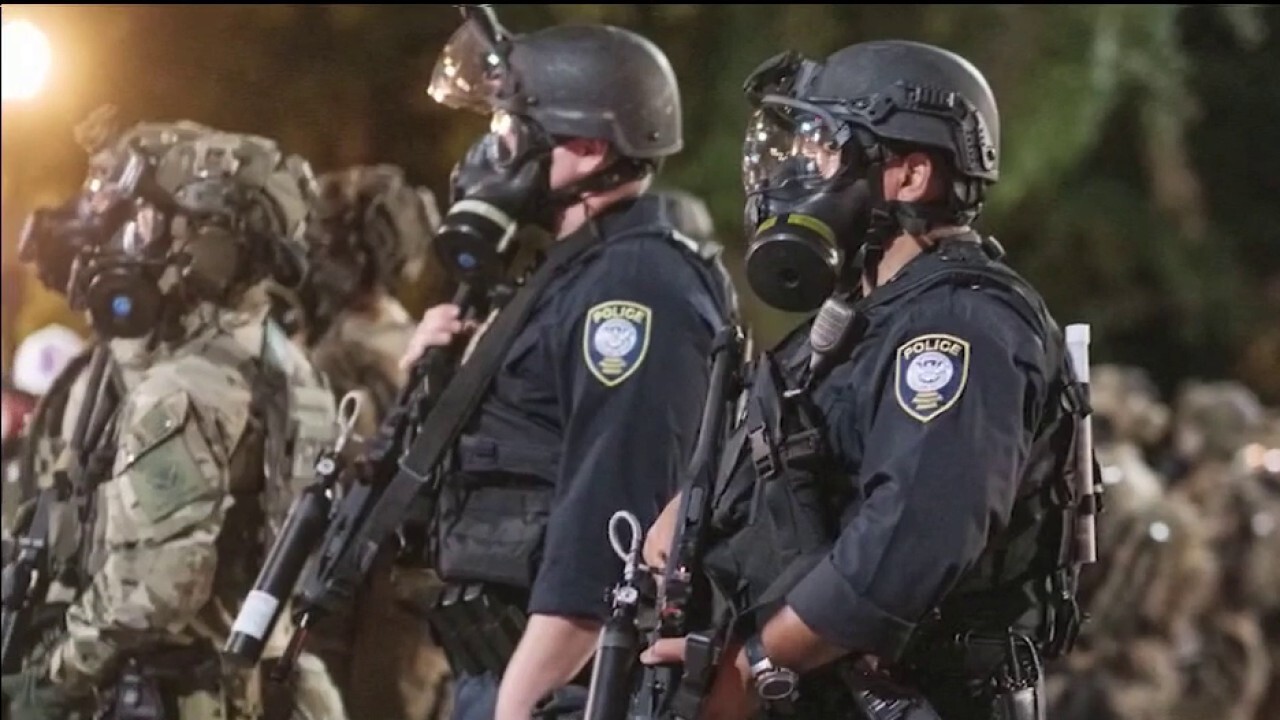 Another protester said men in green military fatigues and generic “police” patches jumped out of an unmarked minivan early Wednesday and arrested him as he walked home from what he characterized as a peaceful protest. He told The Washington Post he was scared because he did not know who detained him.

“Authoritarian governments, not democratic republics, send unmarked authorities after protesters,” said Sen. Jeff Merkley, D-Ore., on Twitter, along with a video of a protester being arrested and placed into an unmarked van. “These Trump/Barr tactics designed to eliminate any accountability are absolutely unacceptable in America, and must end.”

Gov. Kate Brown, a Democrat, accused Trump of using the power of the federal government to distract the public from the resurgence of the coronavirus in the United States.

Fox News' Morgan Phillips and The Associated Press contributed to this report.