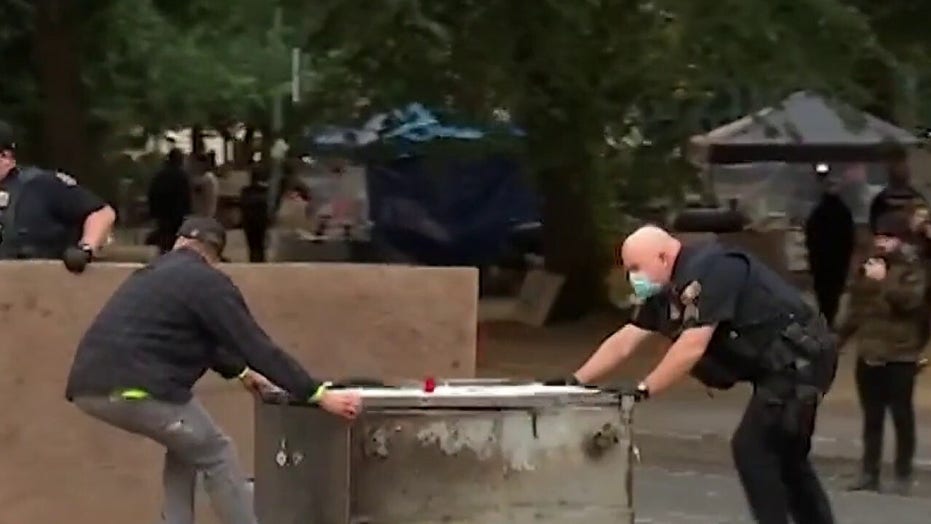 Portland protesters clash with police as they try to enforce their own ‘CHOP’-like zone in Oregon; William La Jeunesse reports.

Gripped by violent demonstrations for weeks, Portland police quickly squashed protesters’ attempts to establish an autonomous zone similar to Seattle's by clearing barricades and closing down a park across from a courthouse.

Protesters had pitched the tents Tuesday night into early Wednesday in Lownsdale Park, across the street from the federal Pioneer Courthouse, which Homeland Security was protecting.

At about 5 a.m. Thursday, the Portland Police Bureau helped the City of Portland temporarily close the two parks, according to the press release. Portland Police made public announcements that the parks were closed and gave people 10 minutes to leave. Around 5:10 a.m., Portland Police walked through to be sure everyone received the message and move people out.

Police said “some arrests were made” but the “streets around the parks remain open to traffic.” The parks will remain closed until lawns, bathrooms, benches and public art are repaired.

The bureau shared a livestream link that showed officers assembling a chain-link fence around the park Thursday morning. Sleeping bags and other debris left behind by protesters were scattered across the lawn inside.

“Support is needed to defend Riot Ribs and the Autonomous Territory in Lownsdale Sq.,” the account, which has more than 22,000 Twitter followers, said. “Solid numbers are needed at all hours of the day, especially 12 a.m. to 5 a.m.”

The group instructed protesters to bring tents, tarps, sleeping bags, gas masks, respirators, helmets and barricades “and other shield tools to defend from the feds and police.” It also said that protesters should refuse to answer any questions asked by police.

Speaking to Fox News Thursday morning, U.S. Customs and Border Protection (CBP) Commissioner Mark Morgan made a distinction, explaining that those wreaking havoc on Portland’s streets for six weeks straight “are criminals, those are not protesters.”

Acting Homeland Security Secretary Chad Wolf on Thursday released a timeline detailing how over the past few days officers’ personal information has been released online and rioters have assaulted law enforcement with hammers, lasers, slingshots and fireworks. Others have been armed with sledgehammers, tasers and “flaming debris.”

Meanwhile, a letter penned by four Democratic members of Congress from Oregon – U.S. Sens. Ron Wyden and Jeffrey Merkley and U.S. Reps. Suzanne Bonamici and Earl Blumenauer – said “this politically drive federal response is intolerable,” especially after a demonstrator was struck in the head and hospitalized when a federal officer fired less than lethal munition last weekend.

The letter, which was addressed to Secretary Wolf and Attorney General Barr, said federal officers’ “presence and lack of coordination raises concerns about how those engaging in illegal use of force will be held responsible. Portland Mayor Ted Wheeler retweeted the letter Wedesday, calling on “the Trump Administration to be thorough and transparent with their findings.”